In 2016, at just 22 years old, Shamma bint Suhail Faris Mazrui was appointed Minister of State for Youth Affairs in the United Arab Emirates. According to the Los Angeles Times, she is believed to be the youngest government minister in the world and her role is to create pathways for young people to have more engagement with government and within society.

She holds a bachelor’s degree from New York University Abu Dhabi and a master’s in public policy from the University of Oxford, which she attended as her country’s first Rhodes Scholar. 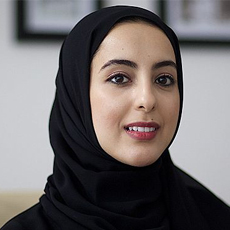 “You are a bold-hearted soul who pioneers pathways towards world benefit with feelings of hope, wisdom and respect.”